1939-1945
Prepares to leave with his mother for America to meet his father and brother. American troops invade Italy on the day of departure and they are unable to leave. Spends the war years in Lago with his mother and very little resources. Works as a cabinetmaker's apprentice and studies sculpture with a man who carves statues of saints.
1947
Emigrates to America with his mother to Pt. Marion, PA where his father works as a laborer for the railroad.
1950
Moves to Garden City, MI with his family and works at General Motors lifting transmissions on an assembly line.
1951-1953
Studies at the Society of Arts and Crafts in Detroit, MI.

1953
Due to his language barrier graduates from Garden City High School at the age of 21 while continuing to work evenings at General Motors.

1953-1955
Serves in the US Army, stationed in Austria in an armored tank division.

1959
Daughter, Katherine Elizabeth (Cici) born. Look Magazine commissions him to do a photographic "human story" about his mother, a widow immigrant, returning with her to Calabria (where she remains until the end of her life). Publishes a book of these photographs in 1979.
1960
Graduates from Michigan State University with a BA. Meets Richard Merkin and David Pease, fellow students who remain friends throughout his life. Studies under Lyndsey Decker who introduces him to welding and sculpture after his initial interest in photography. Also studies with Charles Pollock, brother of Jackson Pollock.

1972
Solo exhibition at the Whitney Museum of American Art, NYC. Installations at the Clocktower, NYC and Virginia Commonwealth University, Richmond, VA. Teaches in Rome, Italy for Tyler School of Art. 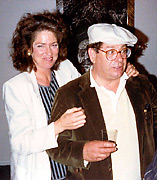 1984
Constructs "Figure Holding Fire" with his son Joe at Santa Barbara Museo, Mammola, Italy, his first public commission. Joe and he continue doing the public commissions together through the years. Included in "Primitivism in 20th Century Art" at the Museum of Modern Art, NYC. Has his first one-person show in Florida at the Bruce Helander Gallery.

1985
Begins the "Metaphysical" series with Ryk Williams in the water tank, UCSD. "Italo Scanga New Works" at Arte Contemporaneo, Mexico City, Mexico. Travels to Leggia, Switzerland and creates work for dealer Reto a Marca with assistant Chuck Collings. Toru Nakatani begins working with him at UCSD, and continues this working relationship (at his Turquoise Street studio) for the remainder of his life.

1990
Artist in Residence at Skowhegan School of Painting and Sculpture, Skowhegan, ME. Builds sculptures with son, Bill. Exhibits at Betsy Rosenfield Gallery in Chicago, IL. Divorces Stephanie Smedley. Starts spending a majority of his time working on paintings.
1991
Meets welder David Grindle and initiates a series of metal sculptures with glass trees and cones and several large welded "Trees" at Turquoise Studio. Travels to Vietri Sul Mare, Italy with son Bill to work at a ceramics factory.

1992
Meets Su-Mei Yu, a chef and restaurateur, his companion through the end of his life. Exhibits in solo shows at the Athenaeum Music and Arts Library, La Jolla, CA and the Susanne Hillberry Gallery, Birmingham, MI. Meets David and Leisa Austin, and becomes a featured artist at Imago Galleries, Palm Desert, CA.

1993
Moves to Su-Mei Yu's house in La Jolla, CA but continues using Turquoise Street as a studio. Has one person shows at the Tacoma Art Museum, Tacoma, WA and the Fay Gold Gallery, Atlanta, GE.
1994
Meets Nando Randi, visiting from Ravenna for the America's Cup. Over the next years establishes friendships with many Italians visiting San Diego and living in Italy including Chiara Fuschini, Felice Nittolo, Diego Esposito, Ubaldo Grazia and Giuseppe Padula.

2000
Begins work on an exciting new series of work, after several years of primarily painting, called the "Candlestick" series with Mike Patterson and Neal Bociek. Exhibition at Larry Becker Gallery, Philadelphia, PA
2001
Major commission, "Continents" at the San Diego International Airport. Ready to travel to Italy for several months for scheduled exhibitions in Lago, Calabria and Ravenna, Italy. Also working on creating a museum of his work in his hometown of Lago, Calabria. Dies of heart failure on July 27 at Turquoise Street studio at age 69.